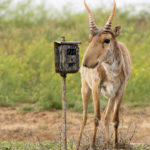 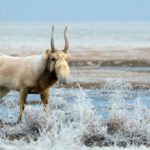 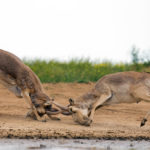 Male saigas fighting at an artesian well in the “Stepnoy” nature sanctuary (photo by A.N.Gilev, May 2022) 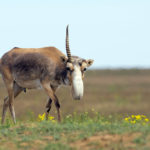 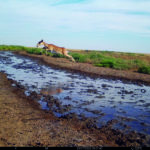 Saiga jumping (taken with a camera trap and provided by the “Stepnoy” nature sanctuary, July 2022) 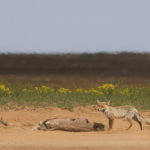 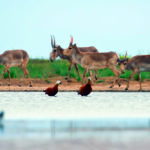 Ruddy shelducks at the artesian well in the “Stepnoy” nature sanctuary (photo by A.N.Gilev, May 2022) 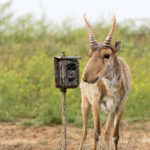 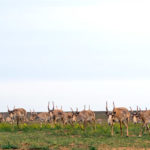 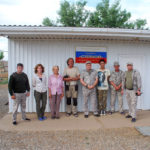 Inspectors and participants of the “Saiga Habitat Assessment of the Northwest Pre-Caspian Region” project at the cordon of the “Stepnoy” nature sanctuary (photo by T.Yu.Karimova, June 2021)

The evolutionary strategies of the saiga antelope, such as an early reproductive ability, high female fertility, polygamy, herd instinct and migration, have been helping them to survive since the Late Pleistocene in the changing environmental conditions. In the Holocene they were forced to coexist with humans, and so a new stage in their history began. Aside from the mass hunting, exterminating the saigas, the human impact on their habitat has also increased due to the widespread agriculture, especially in Western Europe, which eventually reduced the species’ range. By the early 20th century, only a few patches of their large range remained: the untouched areas of the lower reaches of the Volga River in Europe; Ustyurt, Betpak-Dala, the Ili-Karatal interfluve, China and Mongolia in Asian territory. The conservation measures implemented in the 1920s by the Soviet Union government preserved five saiga populations that currently exist in the world. Four of them (Northwest Pre-Caspian population in Russia; Ural population in Kazakhstan, Russia; Ustyurt population in Kazakhstan, Uzbekistan, Turkmenistan, Russia; Betpakdala population in Kazakhstan, Russia) belong to the nominative subspecies S. t. tatarica, while the fifth one (S. t. mongolica (=S. borealis)) inhabit Western Mongolia. Since the end of the 20th century, the state of the Northwest Pre-Caspian population has been of particular concern. The reason for that is the severe decrease in its number (from 800,000 in 1958 to 5,000 in 2015), and of its main habitat (from 60,000-70,000 km2 to 2,000-3,000 km2). A significant part of this population switched to a sedentary lifestyle in the protected areas of the “Chernyye Zemli” ecological region. A long-term shortage of mature males (<10%) slowed down the population growth and, consequently, decreased its numbers. However, thanks to various protective measures, the Northwest Pre-Caspian population has been gradually growing since 2016, and reached 18,000-19,000 in 2022. The further growth depends on the effectiveness of the actions that are supposed to be carried out as part of the “Strategy for the Conservation of the Saiga in the Russian Federation”. In addition to effective protection and full-scale monitoring, the strategy includes the removal of various obstacles that hinder saiga migration and cause habitat fragmentation; improving the quality of the habitats; creating new protected areas on different levels in the most suitable habitats and their integration into a single network via ecological corridors; development and expansion of environmental education activities.