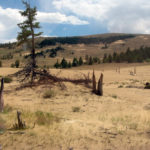 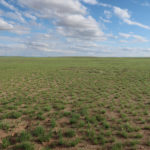 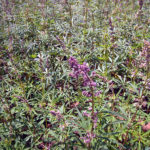 Overgrowing Cannabis ruderalis Janisch. in the severely disturbed natural habitats and on the arable lands, Selenge Aimag (Photo by Yu.I.Drobyshev) 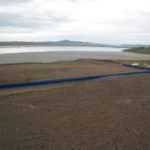 Slurry pit near a mining and processing enterprise of Erdenet city, Orkhon Aimag (Photo by Yu.I.Drobyshev) 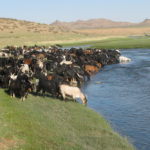 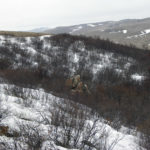 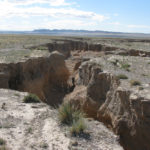 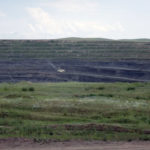 In 1989-1990 the Joint Russian (Soviet)-Mongolian Complex Biological Expedition of the Russian Academy of Sciences and Mongolian Academy of Sciences carried out a mapping and assessment of the natural ecosystems’ condition in the entire territory of Mongolia. These complex studies resulted in a synthetic map “Ecosystems of Mongolia” at the scale of 1:1,000,000 that included information about the level of their anthropogenic disturbance (Ecosystems …, 1995). The map became a starting point for the further monitoring of Mongolian environment. The drastic socio-economic changes that have been affecting the country over the last decades have caused new environmental risks and increased already existing ones, therefore accelerating digression processes and reformation of Mongolian ecosystem continuum. This was the reason for starting a new monitoring research and mapping at the same scale in 2012-2017. The outcome of these long-term studies of Mongolian terrestrial ecosystems was the atlas of Ecosystems of Mongolia (2019), published in English.

The comparison of the data obtained in 1989-1990 and 2012-2017 showed that the total area of natural ecosystems decreased only by 0.5%. However, the analysis of their condition is a definite evidence of increasing degradation processes for the outlined period. Thus, the areas of non-disturbed and slightly disturbed ecosystems reduced by 1/3, the moderately disturbed ones grew by 44%, and the strongly and very strongly disturbed areas increased more than twice. A similar situation can be seen in the ecosystems suitable for pastures.

The main reasons of anthropogenic disturbance are agricultural factors, such as overgrazing, forest fires, cutting, plowing, mining, and growing of residential territories. By 2017, the area of anthropogenic ecosystems grew by 40%, including the plowed up lands as well as industrial and residential ecosystems.

For a detailed study of degradation mechanisms of terrestrial ecosystems under the impact of the main anthropogenic factors, we carried out monitoring and mapping in model somons (divisions), model testing plots and key sites, mainly located in the areas of high environmental tension. As the result, the maps of ecosystems and their anthropogenic disturbance were created at the scale of 1:200,000 and larger; they were also included into the atlas (Ecosystems …, 2019). These studies helped to make and develop the representative network of model territories for the long-term monitoring covering all nature regions of the country.

Therefore, while comparing the data of 1989-1990 with the newest materials, we were able to calculate the areas currently occupied with various ecosystems, to assess their condition and determine their transformation trends.