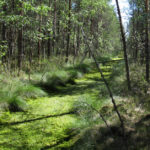 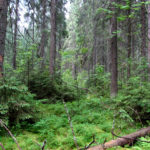 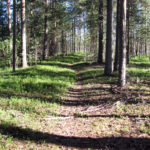 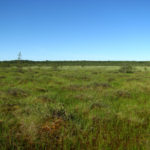 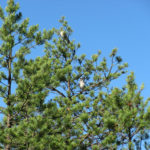 Young Lanius excubitor, June 2019, the species is included into the Red List of Russian Federation (Photo by V.V.Kontorshchikov) 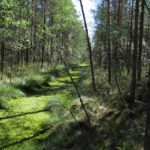 Overgrowing drainage channel in a transitory bog (Photo by V.V.Kontorshchikov) 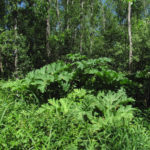 Intrusion of Heracleum sosnowskyi into forest ecosystems (Photo by V.V.Kontorshchikov) 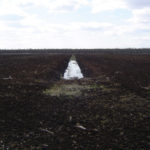 Repairing of the peat fields in the “Bublik” nature boundary in 2004 (Photo by V.V.Kontorshchikov) 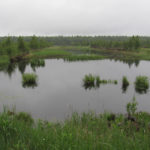 Flooded and overgrowing peat fields in the “Bublik” nature boundary in 2019 (Photo by V.V.Kontorshchikov) 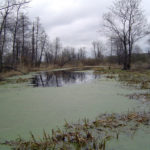 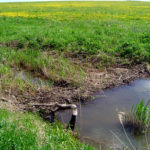 Beavers’ dam in a drainage channel in the agricultural lands (Photo by V.V.Kontorshchikov) 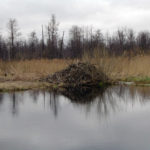 Beaver’s lodge on the oxbow lake of the Dubna River (Photo by V.V.Kontorshchikov) 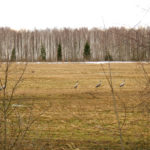 In the XIX-XX centuries in the north part of what is known as Moscow region today, there were large bog massifs, formed in the spot of an ancient ravine for glacial water run-off. Most of Dubnensky massif and the north half of Olkhovsky-Batkovsky one have survived to this day. In the spot of drained bogs there are agricultural lands now, some of which are turning into swamps again and are overgrown with forest. The biodiversity of this territory is very high. Currently, the work is underway to plan a regional nature park “Crane Country”, the area of which will cover more than 75 thousand ha.

To explain the reasons for the park creation, the authors of this article studied the dynamics of natural and anthropogenic landscapes as the habitats for rare and background bird species. We collected and analyzed the data on the history of this territory development for the past 100 and more years, such as bogs draining, peat digging, forest utilization and agriculture. In this article, to create a scientific basis for ecological management, we bring up our original researches on the changes of numbers and species composition of birds, in relation to intensity and agriculture management types.

We determined the main factors of possible influence on the numbers of various bird species in the past 40 years, such as reduction of agricultural lands, hay meadows and pastures, secondary bogging, reduction of fertilizers and pesticides usage, cease of peat digging, flooding of lowlands formed in the spots of drawn peatbogs, forest areas growth, increase of ripening and mature coniferous and overmature deciduous forests, area growth of young deciduous forests formed in the spots of abandoned agriculture lands, big areas flooding due to the activities of beavers, increase of average annual air temperature and annual sum of precipitation.

The result of our researches showed that the territory of the future nature park “Crane Country” is a unique natural-anthropogenic territorial complex of Central Russia, with a significant potential for economy (primarily, in the field of agriculture), nature protection and ecological tourism.