Demyanets S.S., RosenfeldS.B. The Influence of Spring Hunting on the Distribution of Geese of the Kumo-Manych Depression // Ecosystems: ecology and dynamics. No 1. 2022. P. 134-146. | Abstract | PDF | Reference | 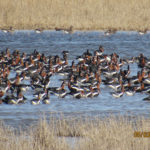 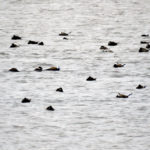 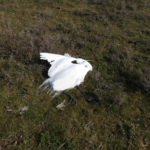 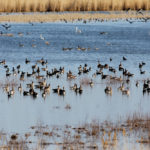 Red-breasted geese in the flock of Greater White-fronted geese (photo by S.S.Demyanets) 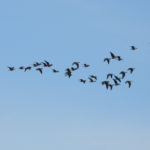 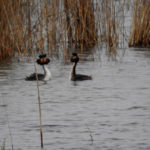 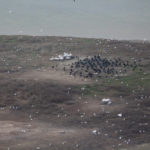 Dalmatian pelican’s colonies on the islands of Manytch (photo by S.B.Rosenfeld) 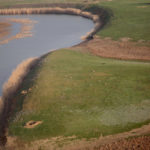 Hides and geese profiles of hunters located at the water’s edge, which is a gross violation of the rules of hunting (photo by S.S.Demyanets) 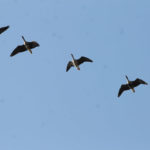 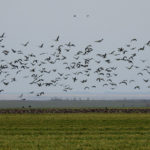 The flock of Red-breasted geese on the field within the area with open hunt (photo by Yu.V. Babichev) 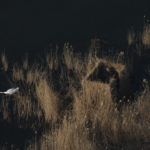 Poacher in the hide near the mute swan shot on the nest (photo by S.B. Rosenfeld)

The influence of spring hunting on geese has long been recognized throughout the world as the main component of the decline in their total number. Unfortunately, the spring hunt for migratory birds, which has long been abandoned by all European, part of Asian and North American countries, is still underway in Russia. This negates the efforts of specially protected natural areas to preserve rare species of Anseriformes. Restrictions on spring hunting at the regional level can be introduced with great difficulty, mainly due to the powerful hunting lobby. Measures to restrict spring hunting in the Republic of Kalmykia were carried out from 2008 to 2012, and during this period, an increase in the number of this species was noted. In 2019, after no measures were taken to restrict hunting in the Republic of Kalmykia, a smaller number of red-breasted goose at the stop can be noted compared to the one when restrictive measures were in force. In our opinion, the results of the study are a good illustration of the strong influence spring hunting has on the populations of Anseriformes, which are forced to use only a part of the territory suitable for migratory stops. The most effective measures will be the complete closure of the spring hunting for waterfowl in the Kumo-Manych depression and the creation of temporary mobile resting zones on key water bodies of the depression during the autumn-winter hunting season. In 2020, thanks to this study, the regional hunting parameters prohibited spring hunting for waterfowl on the territory of the Kumo-Manych depression in the Republic of Kalmykia and Stavropol district.

Funding. The research was carried out for the ЕС LIFE16 NAT/BG/000847 Grant “Life for Safe Flight”.

Acknowledgements. The authors express their gratitude to the administration and employees of the “Chyornye Zemli” Reserve, to A.V. Nikitin, the director of the “Manych-Gudilo” Tourist and Hunting Complex, and his pilots, as well as to the Ministry of Natural Resources and Environmental Protection of the Republic of Kalmykia. We also thank A.S. Opaev for his help with statistical methods and for his valuable comments.