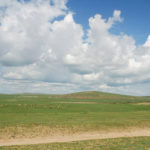 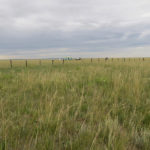 Mixed grasses and Stipa community on the fenced territory of the steppe station “Tumentsogt”, Mongolia, August 2016 (photo by I.N. Safronova) 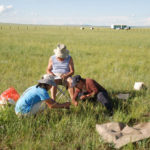 Geobotanical description of a site (1 m2) before it was mowed, Mongolia, August, 2017 (photo by T.Yu. Karimova) 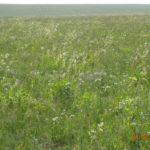 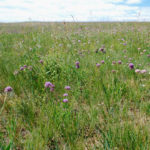 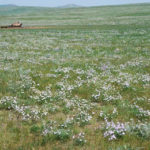 Area used for grazing on a steppe with mixed grasses and three Stipa species with Heteropappus hispidus, Mongolia, August 2018 (photo by T.Yu. Karimova) 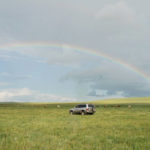 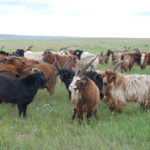 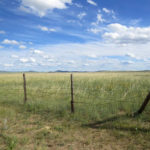 Monitoring of the state of the plains of forbs-feather-grass steppes of Eastern Mongolia is carried out within the framework of scientific and practical research as part of the Russian-Mongolian complex biological expedition of the Russian Academy of Sciences and Mongolian Academy of Sciences, since 1982 to the present time. The dynamics of steppe communities is considered by the materials of the steppe station Tumentsogt, where for twenty-five years (1982-2006) the work was carried out on a fenced test plot of  400 m2 and eleven years (2008-2018) – on botanical areas of 100 m2 along the transect. The influence of meteorological conditions (heat and moisture supply, amount and distribution of precipitation during the growing season) on the main characteristics of the three-feather-grass formation communities (species richness, species saturation, abundance of species, the density of herb layer, above-ground biomass value) is considered.

Based on the monitoring data of 1982-2006, it was found that in the Stipa grandis community during the growing season there are three periods with a maximum rate of growth of green mass, which are associated with the biological cycles of plant development – the beginning of vegetation, mass flowering and fruiting of dominant species, and virtually independent of weather conditions.

Monitoring data from 2008-2019 showed that the heterogeneous changes in species composition and abundance of species in the communities of the three-feather-grass steppes of Eastern Mongolia are closely related to fluctuations in weather conditions in the long-term development cycle, which is traced through correlations with bioclimatic indicators. The closest connections are revealed with the coefficients characterizing the ratio of heat and moisture in the vegetation period. The species saturation of the communities varies from year to year – the maximum is observed in years with low values of the ombrothermic indexes, and the minimum – in years with high values.

Despite the growth of livestock, noted in General for Tumentsogt Somon in recent years, the pasture load on the steppe communities of the station’s area is small, as evidenced by the obtained distribution of plants in communities by biomorphological types.