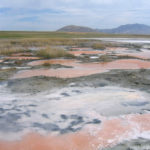 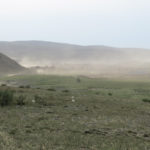 Tuva, Yenisei Basin; Kaa-Khem settlement in the suburb of Kyzyl cannot be seen due to the sand storm, July 2016 (photo by G.I. Chernousenko) 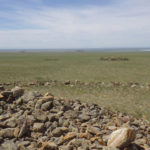 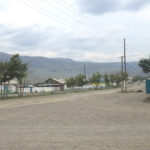 Mugur-Aksy settlement in the mountain hollow by the same name, July 2017 (photo by G.I. Chernousenko) 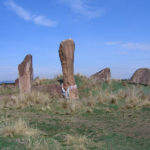 Khakassia, Ust-Abakan region, Salbyksky mould of the Tagar culture, III BC, May 2006 (photo by G.I. Chernousenko) 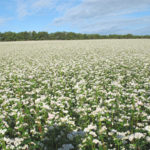 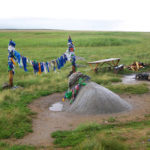 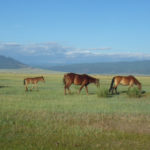 Buryatia, Barguzin hollow, steppe with a view of the Ikatskiy Ridge, July 2013 (photo by G.I. Chernousenko) 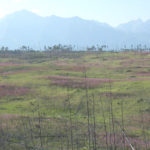 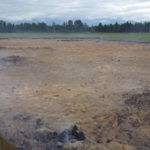 Buryatia, Tunka hollow, “Ice and Fire” − turf burning through the permafrost which starts at 50 cm, July 2015 (photo by G.I. Chernousenko) 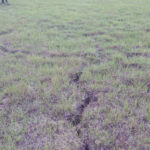 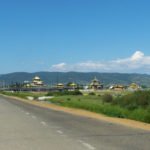 The purpose of the article is to give a climatic characteristic of the basins of the south of Eastern Siberia, in which saline soils are widespread, and also to establish the direction of climate change in connection with modern ideas about its aridization. The article presents statistically based data on air temperature values, annual precipitation, evaporation, moisture coefficients and continental climate over the past 50-60 years for the basins of southern Eastern Siberia according to 11 meteorological stations. The climate of the basin of the region is extremely continental (continental coefficient >214). The average annual air temperatures are mostly negative, having a significant growth trend in recent years, which in some areas has led to a change from negative average annual air temperatures to positive ones. For the studied period the moisture coefficient in the basins of southern Eastern Siberia, according to the median, varied within 0.24-0.74, the average annual air temperature varied from -3.9°C to +1.5°C, precipitation was 135-385 mm/year, evaporation was 490-870 mm/year. The coefficient of moisture, the amount of annual precipitation, evaporation had a multidirectional trend of change: growth, stable values and decrease. So the annual precipitation according to 7 out of 11 meteorological stations has not changed. This was observed in all the considered basins of Buryatia and in the Yenisei basin of Tuva. A small but significant increase in annual precipitation was observed in the south of the Minusinsk depression (Khakassia, Krasnoyarsk Territory), whereas in the Uvs Lake basin in the south of Tuva there was a significant decrease. Evaporation during the study period increased more frequently (6 out of 11 weather stations). A significant increase in evaporation was in the Yenisei Basin and Uvs Lake basin of Tuva (Erzin), in the center of the Minusinsk hollow (Abakan, Khakassia), Udinsk (Ulan-Ude) and Yeravninsky (Sosnovo-Ozersk) hollows of Buryatia. A significant drop in evaporation was observed in Baikal-type depressions in Buryatia, as well as in the Mugur-Aksa high-altitude basin in the south-west of Tuva. In Minusinsk (south of Minusinsk basin and Krasnoyarsk region) and in Kyakhta (south of Buryatia) evaporation has not changed. The coefficient of continentality in 5 of 11 meteorological stations has not changed, which is quite logical, based on the unchanged location of meteorological stations. However, due to changes in the amplitude of annual temperatures in a number of areas, it increased – in Kyakhta and the Yeravninsky hollow of Buryatia, in the south of the Yenisei basin of Tuva, and especially in the highland basin of Mugur-Aksy (Tuva), while in the south of the Minusinsk hollow, the continentality ratio fell slightly (Khakassia, Krasnoyarsk region). The coefficient of moistening did not have a predominant trend. In 4 districts, it had a significant decrease – in the south of the Yenisei basin (Sosnovka) and Uvs Lake basin (Erzin) of Tuva, as well as in the Udinsk (Ulan-Ude) and Yeravninsky (Sosnovo-Ozersk) hollows of Buryatia. In 4 areas, the coefficient of moisture has increased significantly – the south of the Minusinsk hollow (Abakan, Khakassia and Minusinsk, Krasnoyarsk Territory), as well as in the Barguzin and Tunka Basins of Buryatia. In Kyzyl (the center of the Yenisei basin), the basin of Mugur-Aksy (Tuva) and Kyakhta (south of Buryatia). The coefficient of moistening practically did not change. Therefore, it is not possible to argue about the widespread growth of aridization of the south of Eastern Siberia. This process is multidirectional in different basins. Nevertheless, according to our research, the greatest aridization is observed in Tuva – in the Uvs Lake basin (Erzin) and in the south of the Yenisei basin (Sosnovka), as well as in the central dry-steppe regions of Buryatia (Ulan-Ude), less in the Yeravninsky hollow of Buryatia (Sosnovo-Ozersk). In the remaining studied areas of the south of Eastern Siberia, no climate aridization was observed in the last 50-60 years.